For the Indian Railways, over 3.12 lakh posts are unfilled. 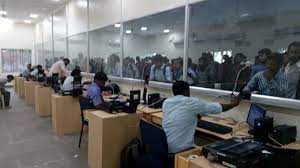 According to The Hindu report, which cited government statistics, 3.12 lakh non-gazetted positions with the Indian Railways are unfilled across the entire nation.

As of December 1, 2022, the Indian Railways had 3.12 lakh non-gazetted vacancies open nationwide across 18 zones, according to the minister's response to a starred question in the Rajya Sabha, the newspaper stated.

Long lines and congestion have resulted from the Indian Railways' severe staff deficit, which has forced many employees to work overtime and shut down countless ticketing windows, according to the newspaper.

We lack workers to relieve us, so I've been doing double shifts for up to 16 hours at a time. Due to a staffing deficit, a 29-year-old employee at the Central Railway ticket booking office in Mumbai was unable to take time off to further her studies.

The employee is studying for his legal examinations and intends to switch to the legal section once he passes them, according to the daily.

In the Central Railway, the safety category alone accounts for 14,203 of the 28,650 open positions, or over 50%. Operating and maintenance workers, including drivers, train examiners, shunters, and various types of inspectors, are among the jobs in this group.

The National Railway Mazdoor Union (NRMU) of the Central Railway organised a peaceful demonstration against 28,705 open positions in the railroads at the Chhatrapati Shivaji Terminus in late November of last year.

According to the Hindustan Times, 24% of the 1.19 lakh roles held by employees had been vacant for almost a year.

The newspaper had also stated that because government openings aren't being filled, most people have to work extra hours, and some people can't take promotions because there aren't any substitutes. The maintenance of the rails and the operation of the trains have been impacted by these problems, endangering the safety of the passengers.

A National Railway Mazdoor Union employee additionally revealed to the Hindu that outsourcing of ticketing services is a result of the staffing deficit. "The railways hire independent contractors who receive Rs 3 for every Rs 100 worth of tickets they sell outside of the ticket counter. The railway workers ought to have completed the task in the first place, he claimed.

According to the report, however, a formal statement submitted to parliament by the Ministry of Railways stated that "Vacancies are filled through promotions as well as through placing indents with recruiting firms in accordance with operational requirements."

"Recruitment process for filling up 35,281 direct recruitment positions... for Non-Technical Popular Categories has been finished," the response continued.

The depressing figures came almost a year after several protests by hundreds of job seekers against the railway recruitment board's hiring procedure in January 2022. According to news estimates, at least 10 million people applied for the 40,000 available jobs. The data also support the assertion that India's youth unemployment rate is among the highest in the world.