The reliable sources have indicated that the UPA government is expected to ask the seventh pay commission to consider merging 50% dearness allowance with basic pay of the employees.
The merger will form part of the terms of reference (ToR) for the seventh central pay commission, which will be taken up by the Cabinet this week. The sources indicate that the issue of interim relief also will be considered.
Officials said the ToR of the Pay Commission categorically states that a proposal in this regard should be actively considered. 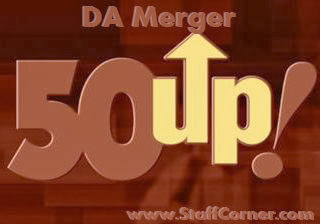 Thats not all cabinet is expected to announce the dearness allowance hike by 10% to 100% by the end of February.  (Read : December CPI-IW at 239, Down but still DA to be 100% wef January, 2014) During the period of 5th CPC, the DA is merged with the basic pay when the former goes beyond 50%. As the DA is touching 100%, almost all unions are pressing for the merger. (Read : With DA touching 100%, demand for DA merger to intensify)
A DA merger will increase the basic pay by 50%. The major impact will be the HRA making the salary increase by 50% of the salary. Also the remaining DA of (100-50) 50% as January 2014 will be on this new basic and will be effectively 75% . The merger will have minor impact on other allowances also.
(Update : Cabinet approves the terms of reference for 7th pay commission. DA merger included)
Read related news @ Business Standard, The Times of India