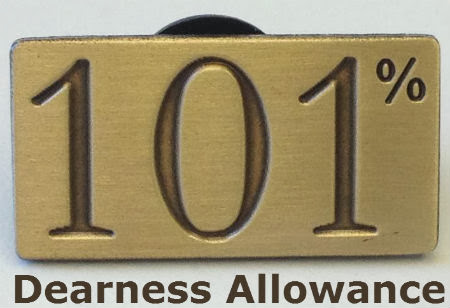 As per the numbers released by the Labour Bureau, Government of India, the All-India CPI-IW for November, 2013 rose by 2 points and pegged at 243(two hundred and forty three). On 1-month percentage change, it increased by 0.83 per cent between October and November compared with 0.46 per cent between the same two months a year ago.

Now the indices of 11 months of the required 12 months for the calculation of the Dearness allowance are available, as informed early 100% DA from January 2014 is ensured. It is also likely that the DA may touch 101%. An increase by three points during the month of December will make the DA 101% and anything less or even nominal negative value will contribute a 10% hike to 100%.