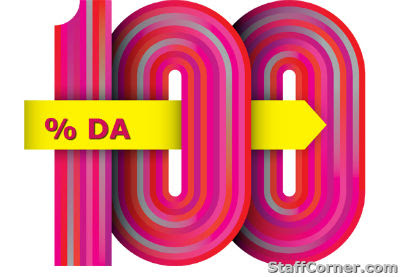 The Labour Bureau Government of India has today released the All-India Cconsumer Price Index for industrial workers(CPI-IW) for the month of December 2013. The index now stands at 239 down by 4 points from the previous month
With this all the 12 indices are available for the calculation for the Dearness Allowance for the Central Government Employees. Based on the calculation, it can be seen that the DA from the month of January 2014 will be 100% - a hike of 10%.Lat half year also saw a hike of 10%

Even if the figures for the DA hike is calculated based on the AI CPI-IW indices, the hike in the dearness allowance will be announced only after the cabinet approval. This likely to happen in the month of March. Keeping in mind the upcoming lok sabha elections, we can expect that the government will announce the hike in time or in advance as a populist move.
With the DA touchimg the 100% mark, the unions are believed to intensify the demand for the DA merger. During the 5th pay commission period there was a clause that the DA will be merged with the basic once it touches 50%. But this was removed by the 6th pay commission.
There are unconfirmed reports that the government is considering the merger of 50% of the DA with the basic. The government is likely to take a decision during the budget session of Parliament in February 2014, before the announcement of 100% DA is made. (Read : DA merger likely : Unconfirmed reports)