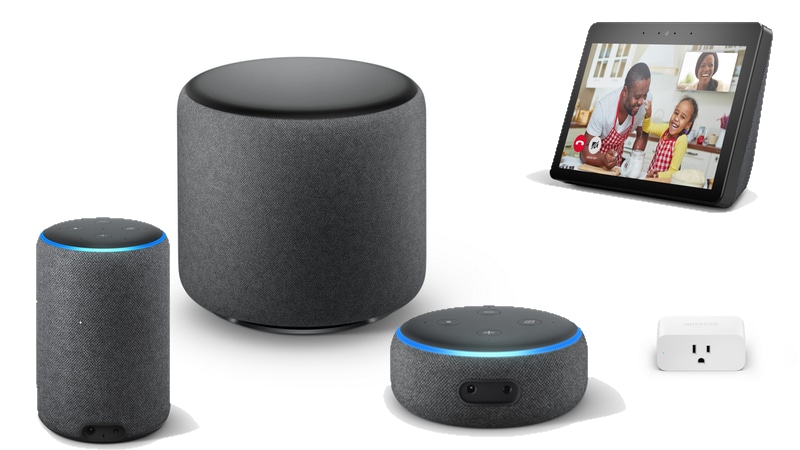 Amazon has announced five new Echo products for India - Echo Dot, Echo Plus, Echo Sub, Echo Show and Echo Input. Three other Echo products — Echo Auto, Echo Link, Echo Link Amp — were also launched but they are not going to be for India.
The Echo Dot (3rd generation) has a new fabric finish, and is priced at Rs. 4,499. Amazon says the speaker delivers better audio quality compared to its predecessor.
The new Echo Plus costs Rs. 14,999, which is the same as the previous generation device. This product is now powered by Dolby with a 3-inch (6.35 cm) neodymium woofer, a 0.8” (2 cm) tweeter, and is louder than before. It comes in three colours — Heather, Charcoal Gray, and Sandstone. Amazon says the bass is stronger and the sound is clearer on the Echo Plus. Alexa, the smart voice assistant that powers all Echo devices, will also allow you to adjust bass, treble, and midrange via voice commands.
The Echo Sub is a sub-woofer that can pair with any Echo speaker. If you want to turn your existing Echo speakers into a nice 2.1 speaker setup, the Echo Sub will help you do that. It pairs with Echo speakers for either a 1.1 speaker setup (one speaker, one woofer) or a 2.1 setup (two speakers, one woofer). This will help you get better audio quality and what Amazon described as room-filling sound from your Echo speakers. The Echo Sub is is up for pre-order for Rs. 12,999 and will ship in November.

The Echo Show is a device with a 10-inch screen that has a decent speaker, a front camera, and is connected to Alexa. Think of it as an Echo speaker with a display. The Echo Show will also be coming to India next year, but pricing for the Input and the Show have not been announced yet.
The Echo Input allows you to turn any speaker into an Alexa-powered smart speaker. The Echo Input does not have a speaker but it adds a microphone that hooks up your existing speaker with Alexa. It’s the cheapest in the line of Echo devices focused on Alexa and will be coming to India early next year.