Official info from Minister of State, V Narayanasamy : No proposal to raise retirement age of CGEs 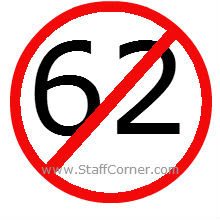 Putting to rest any speculation that the Centre might raise the retirement age of its staff, Minister of State for Personnel, Public Grievances and Pensions V Narayanasamy said on Thursday that there was no such proposal on the anvil.
Narayasansamy was quoted by reports as saying, “There is no proposal to raise retirement age of central govt employees to 62 years.”
The news will be a great disappointment to the employees who were expecting hike in retirement age. There were also opinions against the move as this will create lot of unemployment in our over populated country. It was also speculated that the move may be timed ahead of Lok Sabha elections as a populist move. But this may have a negative impact among new / young voters.
There are about 50 lakh central government employees working in various departments including the Railways across the country.
Recent media reports that were quoted by StaffCorner had claimed that the Ministry of Personnel was working on a proposal to increase the age of service by two years as part of government's plan to defer payouts in the form of pensions and other payments to check fiscal deficit. The reports were suggesting that the PM may announce the retirement age hike during the independence day speech (Read : Proposal to hike retirement age to 62 at Cabinet. Announcement expected at PM's August 15 address )

It was also speculated that the move may be timed ahead of Lok Sabha elections.
Sources in the Ministry had earlier said raising retirement age requires a detailed consultation with all stake holders and discussion with the Finance Ministry. Without the Finance Ministry's nod, the matter cannot be processed, they said.
The retirement age for a majority of central government employees is 60 years. However, the age for retirement in case of teachers and scientists is 62 years.
Chhattisgarh government has recently increased the age of retirement to 62 years from 60 for its employees. This was followed by the Delhi State Government which extended the services of retiring officials by two years.
The age of superannuation varies in state governments with majority of them keeping it at 60 years.
The Centre had in 1998 raised the retirement age of central government employees to 60 from 58 years.