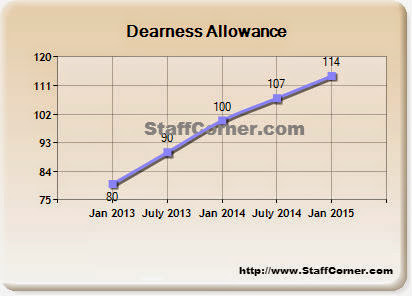 The All-India CPI (IW) for the month of September, 2014 has been announced by the Labour Bureau, Government of India. The index remained unchanged from the month on August'14 at 253. The downward trend is basically due to decline in overall food prices and also the reduction in the diesel prices.

The indices for the next three more months are required dearness allowance from January 2015. An increase by 2 points in the next month followed by one and two points for the next two months will yield the DA figure of 114%. Considering the current inflation trend, this may be unlikely and the DA from January'15 can be 113%.