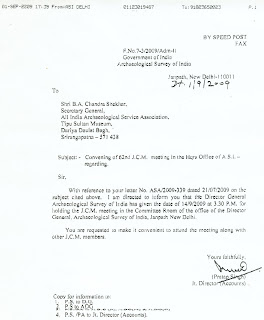 No. NC-JCM-2013/47th N.C. Meeting
August 14th, August 2013
The Secretary,
Department of Personnel & Training, North Block,
New Delhi
Sub:- Convening the 47th National Council meeting — regarding
Dear Sir,
The last meeting of the National Council (46th) was held on 15.5.2010. It is now more than 38 months that the Council met. As per the provisions of the Constitution of the National Council it ought to have been convened once in four months. The non-convening of the meeting has resulted in inordinate delay even in addressing the demands / issues / problems of the employees giving rise to discontent, frustration, anger and agitation.
We had send a few items for the inclusion in the agenda of the National Council vide our letter No. NC-JCM-2010/47th N.C. Meeting dated 17.1.2012. The passage of time without any meeting has resulted in certain issues gaining importance and the settlement of which cannot brook any delay.
We send herewith 12 such items for inclusion in the agenda as per the discussion with JS (E), some of the Staff Side members had a few days back.
This apart, the National Anomaly Committee which was set up in the wake of acceptance of 6th CPC recommendations is yet to conclude its business. There are issues in the agenda of National Anomaly Committee, which was not subjected to discussion even once. The MACP related matters have not also been brought back to the NAC to reach its logical conclusions.
We request you to kindly convene the National Council meeting, meeting of NAC on a date mutually convenient prefaralaly in the months of August itself.
Thanking you,
Yours faithfully,
sd/-
(Umraomal Purohit)
Secretary
Encl.-As above.
CHARTER OF DEMANDS
1. Revise the wages of the Central Government employees including Gramin Dak Sewaks with effect from 1.1.2011 and every five years thereafter by setting up the 7th CPC.
2. Merge DA with pay for all purposes with effect from. 1.1.2011 including for Gramin Dak Sewaks.
3. Remove restriction imposed on compassionate appointments and the discrimination on such  appointments between the Railway workers and other Central Govt. employees.
4. (a) Departmentalise all Grameen Dak Sewaks and grant-them all benefits of regular employees; End Bonus discrimination and enhance bonus ceiling to 3500/-; withdraw open market recruitment in Postman / MTS cadre; Revise cash handling norms; Grant full protection of TRCA; Grant Time Bound Promotion and Medical Reimbursement facility etc,
(b) Regularise the daily rated, contingent, casual workers and introduce a permanent scheme for periodical regularization. Pending regularization, provide them with pro-rata salary at 6th CPC rates.
5. (a) Revive the functioning of the JCM. Convene the meeting of the Departmental Councils in all Ministries/Departments. Settle the anomalies raised in the National Anomaly Committee as also in the Departmental Anomaly Committees. Hold National Council meetings as specified in the JCM constitution. (b) Remove the anomalies in the MACP Scheme.(c) Grant recognition to all Associations/Federations, which have complied with the formalities and conditions stipulated in the CCS(RSA) Rules.
6. Fill up all vacant posts and creates posts n functional requirements.
7. Stop downsizing outsourcing, contractorization, corporatization and privatisation of Governmental functions.
8. (a) Stop the proposal to introduce the productivity linked wage system; (b) discard the performance related pay structure; (c) introduce PLB in all Departments; (d) remove the ceiling on emoluments for bonus computation.
9. Revise the OTA, Night duty allowance and clothing rates.
10. Implement all arbitration awards;
11. Grant Five promotions to all employees as is provided for in the case of Group A services.
12. (a) Withdraw the PFRDA Bill. (b) Rescind the decision to allow FDI in pension sector;(c) Scrap the new contributory pension scheme (d) Extend the existing statutory defined pension scheme to all Central Govt. employees irrespective of their date of entry in Government service.
****
Confederation views:
Agenda for next meeting of the JCM National Council has been finalized on 27.08.2013 in consultation with DOP&T Twelve demands raised by Confederation in the charter of demands are included. (including GDS employees demand) Next meeting of National Council JCM is expected by the end of October 2013.
The letter give by Com. Umraomal Purohit, Secretary, JCM (NC) and the 12 demands included in the agenda are given below:
M. Krishnan
Secretary General
Source: Confederation