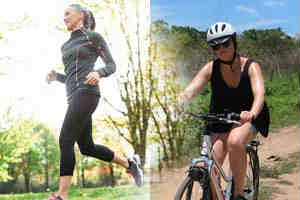 Aerobic exercise may improve thinking skills in older adults with cognitive impairments in just 6 months.
Aerobic exercise, like walking or cycling for 35 minutes three times a week, may improve thinking skills in older adults with cognitive impairments. This is according to a study published in the online issue of Neurology®.
After six months of exercise, study participants’ scores on thinking tests improved by the equivalent of reversing nearly nine years of aging.
The study found that exercise improved thinking skills called executive function. Executive function is a person’s ability to regulate their own behavior, pay attention, organize and achieve goals. There was no improvement in memory.
The study involved 160 people with an average age of 65 and risk factors for heart disease, such as hypertension. Participants had difficulty concentrating, making decisions, or remembering. The symptoms were not severe enough to be diagnosed with dementia, and were sedentary at the start of the study.
Researchers examined the effects of both exercise and diet. The Dietary Approaches to Stop Hypertension (DASH) diet, which is a low sodium, high fiber diet rich in fruits and vegetables, beans, nuts, low fat dairy products, whole grains, and lean meats was used.
Researchers found that participants who exercised showed significant improvements in thinking skills when compared to those who did not exercise. Those who took part in both the exercise and diet had average scores of nearly 47 points on the overall tests of executive thinking skills, compared to an average score of about 42 points for those with exercise and diet alone and about 38 points for those who just received health education. There was no improvement in participants who only consumed the DASH diet.
For those who exercised and followed the DASH diet, their performance on executive function tests improved by nine years from their scores at the start of the study.
“The results are encouraging in that in just six months, by adding regular exercise to their lives, people who have cognitive impairments without dementia may improve their ability to plan and complete certain cognitive tasks,” said study author James A. Blumenthal, PhD, of Duke University Medical Center in Durham, N.C.