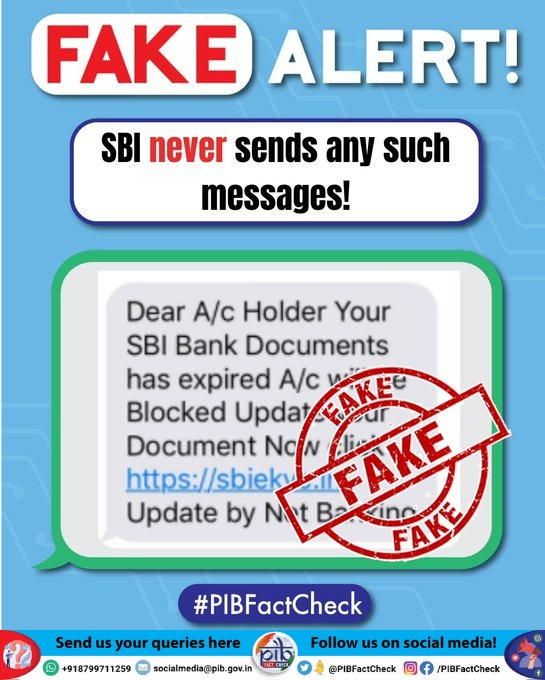 The State Bank of India (SBI) warns users of a new scam that scammers are using to steal money and personal details. The Press Information Bureau (PIB), which disseminates information to the print and electronic media on government policies, programmes, initiatives and achievements, is the one warning SBI users of this new SMS scam.

PIB is asking SBI users to be careful of messages that inform them that their account has been blocked. Scammers are reportedly sending such alerts through SMSes. The agency warns SBI users not to respond to such messages or even calls. These users are also requested not to click on any links with the message.

The government agency took to its official Twitter handle to warn users. In one of the tweets, PIB noted, “a message in circulation claiming that your @TheOfficialSBI account has been blocked is #FAKE.”

PBI is also informing users that they must not:

-if they receive any such message, they should report it immediately at report.phishing @sbi.co.in and the bank will take immediate action.

If you look at the message closely, it clearly doesn’t look to have been sent from SBI. It includes grammatical errors, format issues, punctuation problems, and even the link is not on the official SBI website. These banks always send SMS from an official bank contact. These scammed messages often contain grammatical errors, similar is the case with this one.

This is not the first time that scammers are targeting SBI users with fake messages and malicious links. Previously, scammers asked SBI users to get their KYC done by clicking to the link they sent that required them to enter their banking and personal details. The idea then was to empty the bank account and similar is the aim this time as well.