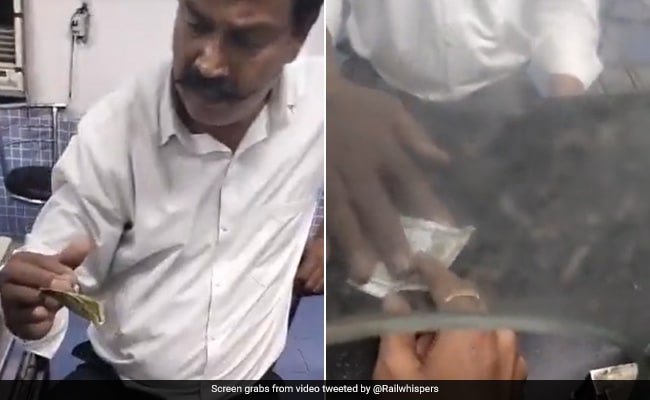 On camera, a railway employee defrauds a passenger at the Hazrat Nizamuddin Railway Station during a cash-based transaction. The video was posted on Twitter on Friday by a user going by the handle Rail Whispers. The post's description states that the incident happened on Tuesday.

In the footage, a man working behind the ticket desk is shown defrauding the cash register. The railway employee is shown trying to trick the passenger despite taking 500 but swapping his note with 20 and requesting additional money to issue a ticket costing 125.

In the video, the railway employee replaces the customer's 500 note with a 20 note from his pocket after the passenger requests to board the Superfast Gwalior train. He even wants more cash before issuing a 125-dollar ticket.

The video has gained a lot of attention on social media since it was shared, including from Railway Seva and Delhi Division, Northern Railway (DRM Delhi NR). Concerned railway officials responded to the post by stating that "The employee has been taken up and disciplinary processes have been launched against him."

Several internet users also responded to the video in the comment area. A user posted, "I've experienced this numerous times in Chennai. Some railroad employees' unionised hooliganism gives them the confidence to commit such atrocities."

"Dangerous, the first time I have witnessed such magic, m thinking If he has not captured the clip then what would happen," another remarked. "Shame on those who steal from others and scam them out of their hard-earned money. TAKE ACTION, "third comment made.