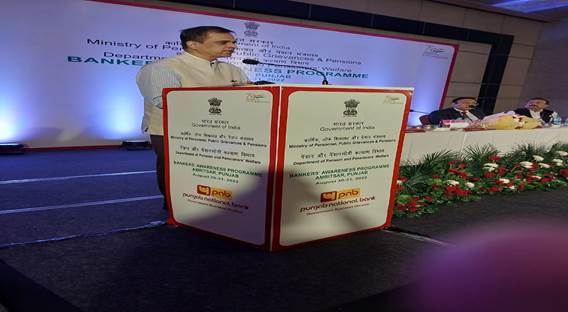 Pension Grievances to be addressed on Priority

Shri V Srinivas, in his inauguration address, stressed on providing seamless experience to pensioners for which the Department is working on an AI/ML-enabled Integrated Pensioners Portal, linking the Department of Pension & Pensioners Welfare portal Bhavishya and Pension Portals of various Banks, creating of Chatbot to ensure seamless interaction between pensioners, Government and banker.

Shri Srinivas said, the Department is setting up a technology team for creating the above digital systems as the first deliverables in collaboration with PNB as well as with other banks. Utmost attention is to be given on process and people related grievances by PNB.  Digital life Certificate was launched in 2014 and is available through Aadhar-based bio-metric devices, Indian Post Payments bank’s 1,90,000 Gramin Dak Sevaks and Doorstep banking by banks. Face authentication technology was launched in November, 2021 which will transform the way pensioners submit their life certificate. The use of fintech in a much larger way will enable quality of life for pensioners. To enhance “Ease of Living” of pensioners and family pensioners, Department of Pension & Pensioners Welfare, Government of India has taken a number of welfare measures in pension policy as well as in digitization of pension related processes. There have been a number of amendments in the pension rules and several clarificatory orders/ instructions have been issued during the last 50 years. These have been compiled and brought out as Central Civil Service (Pension) Rules, 2021 in December 2021.

Since the major Pension Disbursing Authorities are banks, the Department of Pension and Pensioners’ Welfare (DoPPW) has started a series of Awareness Programs for Central Pension Processing Centres and field functionaries handling pension related work in the bank. The objective of these programs is to spread awareness of the various rules and procedures regarding disbursement of pension to Central Government pensioners as well as to update the field functionaries about the changes that take place from time to time through various amendments in the policy and procedures. The purpose of the program is also to understand issues faced by Bank officials in handling these processes and pensioners’ grievances. Digital life certificate and face authentication technology would be a game changer for pensioners and banks in the submission of life certificates. These awareness programs would serve as a huge capacity-building exercise for bank officials.