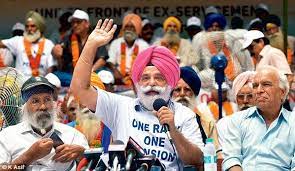 On Monday, a Supreme Court panel led by Chief Justice DY Chandrachud and Justice PS Narasimha demanded that the Central Government follow an earlier directive to pay back arrears to eligible retired members of the armed forces by March 15, 2023.

The Attorney General for India, R. Venkatramani, stated in the onset that the arrears will be implemented soon. The attorney general assured that he was directly in charge of the case. He said that a total of 25 lakh pensioners' tabulations had been submitted to the Ministry for final review and were currently with the Defense Ministry's financial accounts.

Approximately 4 lakh pensioners have already passed away while waiting for their pension, according to senior attorney Huzefa Ahmadi, who is testifying on behalf of the petitioners, including the Indian Ex Servicemen Movement. He had mentioned in the previous hearing that the Central Government had not met the deadline for paying the arrears, which was 01.07.2019. The Apex Court then ordered the Centre to calculate and disperse the arrears within 3 months in its ruling from 16.03.2022. The Court granted the Center a second extension of 3 months' time on September 17, 2022.

The CJI directed the AG to make sure that the court's instructions are followed by March 15, 2023, while acknowledging that the pensions had been on hold since 2019.

The Supreme Court's decision to uphold the "One Rank One Pension" (OROP) Scheme in the Defense Forces on March 16, 2022, had been prolonged by the court for an additional three months.

According to the OROP programme, uniform pension is required to be paid to military personnel leaving in the same rank with the same amount of service, regardless of the date of retirement, and the rates of pension would be updated at regular intervals.

The Bench hoped that the earliest possible payment of arrears would be made. Mr. Venkataramanan, Additional Solicitor General, was tasked by Justice Chandrachud with looking into the matter.