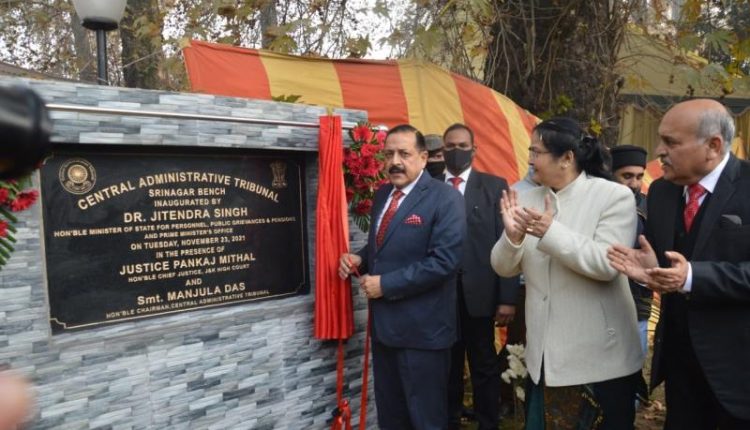 Dr. Jitendra Singh, Minister of State, today inaugurated a separate Bench of the Central Administrative Tribunal (CAT) in Srinagar to deal with service issues of government employees. While the CAT Bench in Jammu began operations on 08.06.2020, the jurisdiction of the Srinagar Bench has now been initiated with the issuance of a notification (dated 17.11.2021). The Minister stated that with today's historic decision, all three important DoPT agencies—CAT, CIC, and CVC—are now fully operational in the UTs of J&K and Ladakh.

Dr. Jitendra Singh stated that Jammu and Kashmir is the only State/UT in the country with two CAT Benches, owing to Prime Minister Narendra Modi's special priority for J&K and his keen interest in matters and issues pertaining to the new Union Territory.

Following the repeal of Article 370, the former state was divided into two separate Union Territories, and employees of the former state of J&K became employees of the Union Territories. As a result, their service-related disputes are now being adjudicated by CAT. At the time of the CAT Jammu Bench, 30,000 service cases were pending, including 17363 from the High Court. CAT Jammu has disposed of 4371 cases out of 17363 received (2452 of Srinagar Wing and 1919 of Jammu Wing). Currently, 12992 cases are pending (7610 in Srinagar and 5382 in Jammu). 7610 cases are being transferred from CAT Jammu to CAT Srinagar. Almost 13000 cases are still pending in the High Court and will be heard by the CAT.