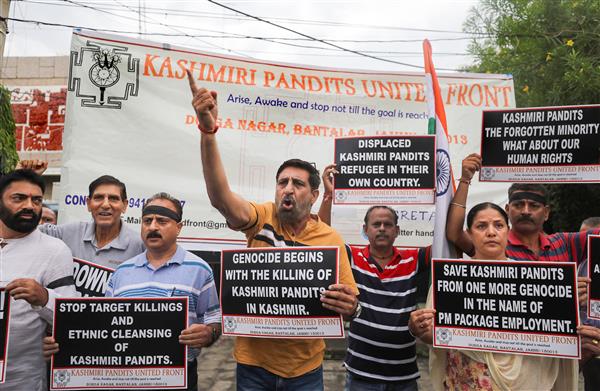 The terrorist group The Resistance Front (TRF), a branch of Lashkar-e-Toiba, have made public the name of 56 employees who are covered by the PM package.

Jammu and Kashmir BJP on Sunday requested the police to open a probe after expressing grave worry about the release of a list of 56 Kashmiri Hindu employees employed under the Prime Minister's Rehabilitation Package (PMRP) by terrorists.

In light of recent targeted killings, J&K BJP spokesperson Altaf Thakur urged LG Manoj Sinha's administration to guarantee the protection and security of Kashmiri Pandits working for the PMRP in the Kashmir Valley.

Thakur remarked that it was unexpected to see the new list of 56 Kashmiri Pandit employees leak and end up on the TRF blog. Terrorists clearly know who is stationed where, so this is a security violation, he claimed.

He added that when targeted killings occur in the Valley, the government must pay close attention to it and find the criminal.

The BJP leader demanded harsh punishment be taken against the officers responsible and urged the police to look into how the list was leaked and acquired by the terror group.

According to Thakur, who called for increased protection for such Hindu workers, "Kashmiri Pandits working under the PM package are already living in fear owing to the murders of their colleagues and the current danger has added to their woes."

In order to combat the tactics used by terrorist organisations to target Hindus working in Kashmir, he urged the government to take any new threats seriously and deal with the issue urgently.

The Central Government's most well-known programme for rehabilitating Kashmiri Hindus who were forced to leave their homes in the Valley in the 1990s as a result of Pakistan-sponsored terrorism is known as the PM Package. Under this programme, state government departments employ close to 4000 people.