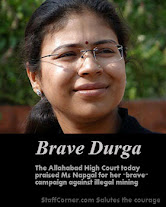 The Allahabad High Court today praised Ms Napgal for her "brave" campaign against illegal mining, but said it could not intervene in her suspension because the petition it heard had been moved by an activist and not the IAS officer.
Earlier the District Magistrate of Gautam Budh Nagar said in a report submitted to the Uttar Pradesh government that the IAS officer never got any wall of a religious structure demolished.
A report based on information from local police and administrative officials clears Ms Nagpal of the charges against her. It finds that villagers removed the contentious wall after she pointed out that clearances to build a religious building, as mandated by the Supreme Court, had not been taken.
Durga Shakti Nagpal is an IAS officer of the 2010 batch from Uttar Pradesh cadre. She came into public view after taking action against corruption and launching a massive drive against illegal sand mining within her jurisdiction of Gautam Budh Nagar. She was later suspended by the government of Uttar Pradesh for demolishing an illegal mosque wall. Her suspension resulted in a large backlash against the government's order, which was perceived to be based on flimsy grounds and there is a growing demand by internet social media, opposition political parties and IAS Officers' associations for her suspension to be revoked.