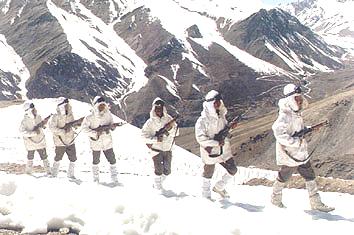 The armed forces are seeking an enhancement of allowances for their personnel posted in "hardship" areas on the pattern of high-altitude Siachen in Jammu and Kashmir.

"Many of the areas where the armed forces operate are hardship areas. So what one is looking at is an enhancement in allowances," a defence official said.

While officials agree that allowances for other areas cannot be matched with that of the Siachen, they are looking at an increase in the 7th Pay Commission which is currently assessing the situation.

At present, a soldier posted in Siachen gets around Rs 8,000 per month as hardship allowance, which is the highest.

At present the allowances vary from area to area. Those involved in counter insurgency operations in northeast and Kashmir get an 'insurgency' allowance while those posted in higher altitude get other allowances.

The official said the Joint Services Memorandum, submitted about two months ago, has raised a number of expectations before the 7th Central Pay Commission.
Read more @ http://articles.economictimes.indiatimes.com/2014-10-15/news/55059465_1_siachen-glacier-7th-central-pay-commission-allowances