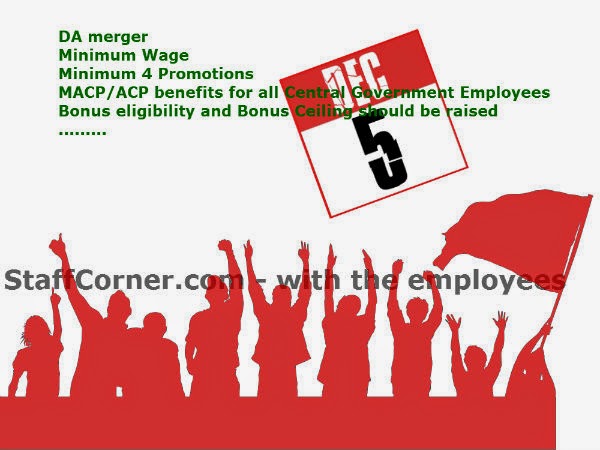 Central Government Employees Confederation (CGEC); National Organisation of Central Government Employees (NOCGE) and INTUC have unanimously resolved to observe “NATIONAL PROTEST DAY” on 5th December, 2014 all over India along with all Central Trade Unions in India (Viz: INTUC, BMS, CITU, HMS, AITUC, TUCC, AIUTUC, AICCTU, UTUC, SEWA, LPF and all Federations of Banks, Railways (NFIR & AIRF), Defence (INDWF & AIDEF), Insurance, Central/State Govt. and other Service Establishments Employees).
Demands
1. Central Govt. should desist from its unilateral move to amend Labour Laws and consult and honour the views of Central Trade Unions.
2. Central Govt. should withdraw the retrograde move in allowing/hiking Foreign Direct Investment (F.D.I.) in Defence Sector, Railways, Insurance, PSUs and other Sectors.
3. Restore minimum wages of Rs.15,000/- to all the Unorganised/Contract Workers and Minimum Wages of Rs.26,000/- to the lower paid employees of Central Government.
4. Demands of Bank Officers and Bank Employees should be immediately accepted in respect of their Wage Revision and other privileges and social security measures, which are over due (Go through the Circulars dated 14/10/2014 & 16/10/2014 issued by the UFBU, AIBOBOA, INBOC, INBEC and INBEF etc.)
5. Strict implementation of existing Labour Laws concerning the Welfare of the Working Class all over India.
6.Benefits of Regular Workers should be given to all Contract Workers.
7. Compulsory Registration of Trade Unions within 45 days and all the ILO Conventions meant for the Workers should be ratified by the Govt. Of India.
8. 50% D.A. of Central Staff should be merged with Pay and Interim Relief should be paid to all employees, pending finalisation of the 7th Central Pay Commission.
9. Minimum 4 Promotions should be given to all Central Govt. Officials, without the hindrances of Departmental Examinations and DPC proceedings, on or before their respective date of retirements.
10. MACP/ACP benefits should be extended to all Central Government Employees, including the staff of Autonomous Body/Semi-Govt. Departments.
11. Bonus eligibility and Bonus Ceiling should be raised as per the present Price Index Cost of Living and Updated Model of Pay Structure.
12. Present quantum of Pension should be raised with adequate Medical facilities/Medical Allowance and the New Pension Scheme should be liberalised as Worker-Friendly.
Accordingly, all the Unions, Associations and their Federations are requested to observe “NATIONAL PROTEST DAY” on 5th December, 2014 by way of Mass Demonstrations and Mass Protest Meetiungs & Rallies all over India and give wide publicity through Newspapers, T.V. Channels and AIR/Doordarshan etc. Concerned Office-bearers are requested to send a report after observing the above programme of action to the undersigned on or before 15/12/2014.